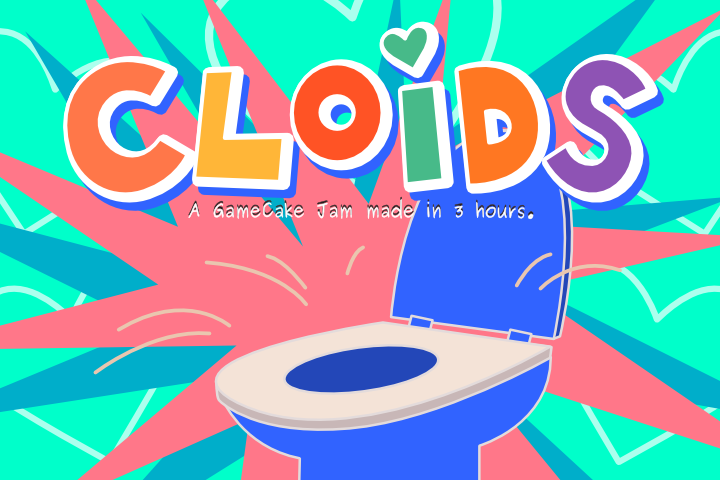 The plan was to make Cloids - The miracle toilet that cures your haemorrhoids, well with a bit of artistic licence thats exactly what we made.

Well actually we really wanted to make "Dance! Dance! Hitler!" but we ended up with this.

Yet another asteroids type game. This time however it has a control scheme that is designed to work with touch screen devices so we could put it on googles android market. Strange how that works really, we can run the same code across multiple platforms but we need to think carefully about design of the input and game in order to be able to actually play it on some devices. Can't say I am over joyed about apples continued success in this war on buttons, yeah I blame them for this problem. Above all it is scary to think that the spectrums dead flesh keyboard would be considered a step up for many of todays popular computer devices.

So yeah, touch screen, place finger on screen or press mouse button to shoot if you have a mouse. Shooting causes recoil so is also your only means of movement. Bust everything on the screen to win. Got a bit of bouncy flocking type stuff going on for the "Grapes" you must remove. This is based on an old flash game we made called Clownoids which is basically the same game, only better. Clownoids was based on my memories of playing one of the sub games in Batalyx that had a shoot with recoil mechanic. Clownoids also turned into EsTension which is somewhat more interesting.

Again we ran over time a little, despite having a generic project to start with. The deadline of three hours is pretty brutal. Mostly it is anoying that there is no time to iterate over the code/ideas. It really is a case of write the first thing that pops into my head and then move on. Next time I am totally going to have a mostly complete project setup and then just tweak a game out of it.

The doing so much from scratch is just a killer when working to such a tight deadline, no time to think.

So, behold Cloids in all its glory, please take it for the rough prototype that it is and have a fiddle with it. The whole point of making these is so we can release everything, the code the graphics the sounds as free to play and free to use. I mean really really free for anyone to use however they wish. Change the graphics, fix the bugs, remove the bits where my brain broke and I stated writing upside down code in the wrong language, just do whatever you want with it.

Play on any android device by installing from https://play.google.com/store/apps/details?id=com.wetgenes.cloids

Hack the source at https://bitbucket.org/xixs/gamecakejam/src/tip/cloids

Watch it being made live online

Again we setup a text to speech engine to pipe the typed chat over the video as audio, the kids seem to like it that way so we will keep doing it.

Join us at http://play.4lfa.com/tv/gamecakejam.tv next month (9th Jan 2100-2400 gmt) to chat and watch us do more of the same.
PREVNEXT
Click here to login if you wish to comment.
View all posts.
View all posts.
8 years ago shi commented on Dr. Bulbaceous: Puzzle Solver...